Coalition of Willing, God Willing Or Not!

(Musings on Obama getting a coalition ready with Arab nations, to fight ISIS. It will work for a while and then it will be time for another coalition to fight another terrorist another day.)


Getting a coalition of a few Arab nations is perhaps the biggest achievement for Obama presidency and John Kerry; six Arab nations are on board! However, something doesn't smell right here. ISIS is merely the front for Sunni declaration of war on the world, willingly helped by no other than their Sunni brothers spread out in Arab land. Incidentally holy war has been declared on all groups practicing Islam under any other banner but Sunni. Is it possible to give with one hand and snatch with the other? And what exactly is holy about killing and beheading people? Apparently, this is a new definition of holy! Plus Obama just declared that ISIS was not really Islamic! What? ISIS said they were 100% Muslims! Just when the world had begun to believe ISIS! But then, what does ISIS know, they're barbarians; Obama should know; he just enjoyed a good round of golf! 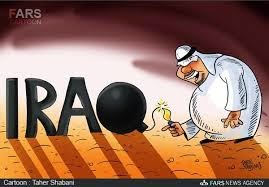 Most probably, it will result in total confusion for ISIS. First there will be bombs falling on their heads and beards; secondly, they will wonder what's going on in those Saudi tents. Didn't those same Saudis send billions of petri-dollars along with plenty of blessings for taking over the infidel world with swords, sabers and scythes? Hasn't' ISIS given a stellar performance? Then what could have gone wrong? Why is Big Bro Saud so upset? What is driving them to take up arms against their own wayward brothers? Perhaps, big Sunni brothers are getting pissed off with ISIS for wandering off course, getting self-sufficient in funds from stealing, taxing, threatening and of course Iraqi oil. Arab nations do not like this, at all; no brother, this will not work!


Or maybe ISIS' sheer brutality is upsetting the delicate balance of zeal and religion. ISIS in Iraq being merely a camel's fart away from different kingdoms, is certainly making rest of Arabs very uneasy! Saudis like to pamper themselves; more than that, they don't want to be reminded they're pampering themselves; after all, they've made themselves upholders of all kinds of tenets like Wahhabism and what not and ISIS brand is not, strictly speaking, Wahhabism! ISIS has made its point and so Saudis and other fat cats from Qatar and Kuwait have decided, ISIS needs to scale back its activities; they are unreliable, have their own flag and are head-happy; no Saudi head can dream of getting itself separated; other heads can roll but not theirs. It's one thing to believe in the 7th century but it's totally different to actually behave as if it is the 7th century! What was ISIS thinking?
Posted by Joyce Singha at 4:41 PM